With Justice For All - Humanities Project 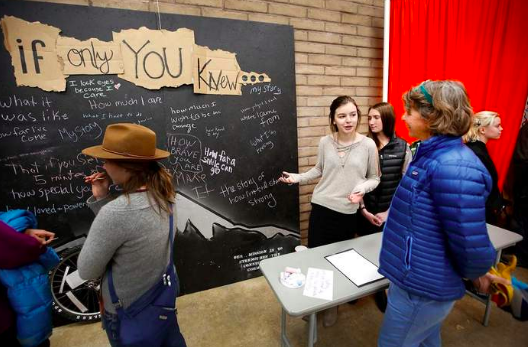 Project Reflection
To start out our project “With Justice For All” we studied unjust law vs. just law, and the Dr. King’s ideas of Civil Disobedience. From there we studied moral and political philosophies of justice that may have influenced our government at a time in history. The four philosophies that we focused on were Deontology, Utilitarianism, John Rawls’ and Libertarianism. After we obtained all of this new information we continued on to research issues in Durango in order to find an issue to focus on. After researching for about a week, as a class we decided to focus on homelessness in Durango. Students split into groups to focus on specifics that they were interested in, and we spent a lot of time listening to guest speakers who were part of community organizations dedicated to supporting and providing services to the homeless population. After this second round of research we decided on what our event/project was going to look like, and what our overarching goal would be. From here we planned the event and created projects that expressed our research and learning throughout this semester. The exhibition was a huge success and I believe as a class we started an important conversation in our community.
​             I was a project manager on the event planning team, so I was involved in planning the event/exhibition from the very beginning. We had big dreams for our event, and in my opinion, it was every that we had hoped. To start off the event, we had two speakers, Julie Westendorf, and Jennifer Turner. They both had different views on the homeless population, and possible solutions to issues they may face. After that student projects were showcased for about an hour, and community members and parents could learn what we had learned, and observe the various projects students had created. Towards the end of the event, we had a community meal with students and members of the community where our goal was to start a conversation within the community. I think one of the most memorable experiences from the event was when I saw people becoming inspired after looking at the student work. Many students raised money or various supplies needed by the homeless population, and a huge amount of people contributed by donating. These donations will make a huge difference in our community, and I hope that these donations will continue. Overall, I believe that this event was everything that we hoped it would be. We had a huge turnout, and wide range of community members. I believe that the conversation started at our exhibition will continue, and possibly lead to some major changes in Durango.
During this project, I was project manager and head of layout, along with Brigid, for our class. Our role was to plan out what the event space would look like, as well as support our peers during their project, in order to ensure that the event would be a success and run smoothly. I believe that I definitely pushed myself in this project in order to ensure that the event would turn into what I wanted it to. There was about a week during this project where I wasn’t exactly busy. I spent most of my time either doing work from other classes, or focusing on small things that wouldn’t make a huge difference in our final exhibition. The rest of the time leading up to the event I was very busy doing everything from planning the layout to organizing the itinerary. Brigid and I did most of our work together, splitting the workload evenly so everything would get done. Although I had some slow days during project work time, I think that I put in a lot of effort into making the event into something that our entire class could be proud of.
This project has seriously impacted me in many ways, and has brought me, and I believe my whole class, closer to the community. Compassion was a key idea in many of the projects presented at our exhibition, and I think that I’ve learned, in a way, where compassion comes from by the reaction of the Durango Community. It was incredible to see so many people come together to start the conversation on how to solve any issues that may relate to people experiencing homelessness. I have noticed a definite change in how I interact with people I see around town, greeting everyone the same way not depending on someone’s appearance. I have developed many skills throughout this project, one of those being collaboration. Each thing I did was done in collaboration with a peer, and one of my biggest takeaways from the event was the fact that nothing we did could have been done by one person. A event like the one we put on impacted the entire community, and will hopefully lead to a positive change.