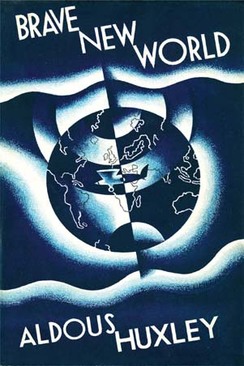 I believe that there are many underlying messages in the book Brave New World, but I think that the main message is that stability is not happiness. The book overviews how a seemingly perfect society, with non-reversible stability, is not a happy society. Everyone is expected to be happy where they are in life, because as children they are conditioned to think that way, and if something is to happen, the society created a drug, soma, to dispel negative emotion. Towards the end of the book, you can really see that no one is genuinely happy, they just live in a world where no one really can be actually happy, because they’re not allowed to have real emotions.
When reading Brave New World the idea of happiness is a huge theme throughout the book. The varying characters really portray how happiness exists and how it doesn’t. A specific part of the book, where I really thought about happiness was when Mustapha Mond was talking about his personal perspectives on current society, and what he thought should be changed. I remember that he talked about how happiness is not necessary for stability, because if no one knows what happiness really means, they won’t cause conflict when trying to achieve happiness. Everyone in the book believes they are happy, or take soma so they don’t have to face reality. No one is actually aware of society or themselves, and who they are in the world.
When John says “nothing in civilization cost enough” I think that he is saying that people don’t pay emotionally for anything. The statement has nothing to do with material costs, but what people pay for their actions. Everyone within the society of the book doesn’t understand what he’s saying, because they can’t connect to it at all, because their lives are easy, and they don’t ever worry about having negative emotions because of something they did. From living on the savage reservation, John thinks that%2

During the seminar someone came up with a possible solution for a happy and stable society, and I couldn’t decide if I agreed or disagreed with it. The solution was to have every single person have equal opportunity with what they want to achieve. When thinking logically about this solution, I honestly don’t think there is anyway that it could be achievable, or dependable. People who worked to achieve where they are now, and are happy with where they are, would most likely be outraged that now everyone can get anything they want in life. Although there are all these factors, the idea of complete equal opportunity appeals to me, I think a huge population would benefit from it, but I think it would only last for a short time. In the way our society and government is set up right now, we can’t afford to give everyone equal opportunity, at least not consistently, and eventually someone would feel like the system was unfair, which would most likely collapse all stability, and a new society would have to be rebuilt.

In this seminar, I think I did the best in focusing more on a discussion than a debate, I also believe I improved from the last seminar in this aspect. I generally like to completely stick to my opinion, and not switch. In this seminar, I made an effort to really think about other people’s opinions, and instead of shutting them down, think about how that connects to my opinion. In the last seminar, I feel like I wasn’t very open, and didn’t want to take on different opinions, but I think I overcame this in the Brave New World seminar. When someone challenged my opinions in this seminar, I would listen, and think about what they said, and sometimes even changed my opinion based on what they said. It think that the themes of Brave New World are very controversial, and I didn’t have very many “set in stone” opinions, so I think that made it easier for me to have a discussion rather than a debate.

I think the major key idea that I understood from the book, was that stability and happiness really don’t have any connection. The book portrayed how in an incredibly stable society, illusions of emotions like happiness can be created, but real happiness doesn’t exist. In today’s society, people generally work towards their goals, which creates happiness. In Brave New World, I can’t see how anyone could be genuinely happy, because they live predetermined lives, with set up jobs, relationships, etc. Personally, what makes me happy is when I have a goal to achieve, and when I achieve it, I reach happiness. In the book, they aren’t able to create goals for themselves, and live in an illusion of happiness because of the drug, soma, that they take. Many people in our society use drugs to create illusions of happiness, but when they stop taking those drugs, they won’t be happy. This book showed me that even if everything is how it should be, and everything and everyone is in a stable society, that doesn’t mean that anyone is actually happy. 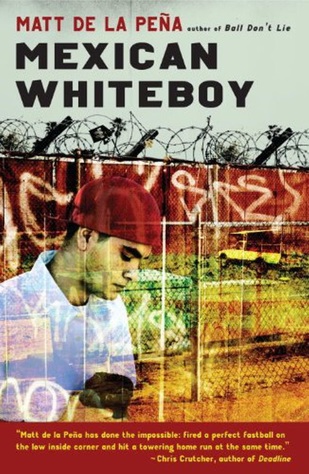 During the seminar, one of my classmates brought up a phrase that was fairly unclear to me, it was “if you have lived a perfect life, you won’t ever be perfect.” I can’t figure out quite what my classmate was getting in this statement. At first I thought that they meant that people who have had hard life experiences are in a way “better” than people who have had easy lives. I disagree with that way of understanding the statement, but I think I can see where they were coming from. If they meant that people who have had hard life experiences may no more about the world, and have different and important unique perspectives, then I agree. “Nobody paid him any attention anyway because he was Mexican. He roamed the school halls with his head down like a ghost. Drifted in and out of classrooms without a peep. Nobody even saw him as a real person. But down here, where everybody's skin is dark, everybody seems to be coming at him.” I think this quote really ties into what my classmate is saying, because it goes over how different races judge each other based on their life experiences, Danny deals with this in his everyday life, but I don’t think he would, under any circumstances, consider himself “perfect.” Over all, I think the life experiences that you have had, shouldn’t affect how you’re viewed by society.

In the seminar, there was a lot of talk on how separated the races are, and how many people feel like they can’t connect with people of other races because of how they have been socialized. I can connect with this because I have had some experiences, though not many, where I have felt uncomfortable because of my race. One example of this is when I was in a Navajo flea market, and I didn’t see any other people of my race their except for my family. I kind of had a sense that I was being judged because I was white. When I was asked myself my I felt like that, I realized that I was falling into stereotypes that were part of my life, that native people don’t like white people because of how we live. This isn’t true in most cases, but I still had an underlying uncomfortable feeling that I shouldn’t be there. In Mexican Whiteboy there is a quote that directly correlates with what I’m talking about “Nothing hypes him up more than when people are watching him. Especially white people.” I feel like this defines those walls that are put up between races, because this person is saying that he acts differently around white people. If people connected with the fact that they be uncomfortable with the way that different races interact, then I think that changes could be made for the better.

I think that overall in this seminar I did the best in sticking to the question asked, and not branching off into different ideas. In other seminars I’ve done in my life, I have struggled with not branching off, and sticking to the topic, which I feel like I did well in this seminar. In the seminar rubric that we were given, it said that you had to bring up “key points based on evidence,” which I think I did very well when sticking to important main ideas. Something I could have worked on in the seminar is inviting people who were quieter into the conversation, and asking the group more questions that I thought of that came from the discussion. In future seminars I will be sure to invite more people into the discussion. I think that I don’t do this in some seminars, because I think that the people who aren’t talking maybe don’t want to talk, but I need to get past that, and make sure everyone has a chance to speak. In terms of asking more questions, I need to formulate them so they make sense, then ask the group in a way that will achieve the discussion that I’m looking for. I think that altogether, I did very well in this seminar, but will always be able to improve how I perform future seminars.


I think that overall, the most beautiful line in Mexican Whiteboy was “I came here because sometimes I feel like a fake Mexican. And I don't want to be a fake. I wanna be real.” I think this line really encompasses what the entire book is about. Danny is constantly trying to find his identity, he doens’t want to to be half white, half mexican. He wants to either be mexican or white. When he goes to National City, I think he feels overwhelmed, and like he can’t be a real mexican because he doesn’t speak Spanish, and doesn’t fit in with the stereotypes that that culture identifies with. The line doesn’t just directly correlate with race, it can mean different things to different people, but I know that everyone want’s to be someone real. No one ones to be that one person in between, who doesn’t know who they are.