One traditional aspect of Dia de Los Muertos (day of the dead) are Calaveras Literarias, which translates to "writing about skeletons." Calaveras Literarias are usually poems that usually mock political figures through the use of skeletons and cartoons. Jose Guadalupe Posada was one of the most famous social satirists in Mexico. He would write poems and cartoons that mocked the actions or profession of someone deceased, even if the figure written about was still alive. Calaveras Literarias are traditional at Dia de los Muertos because they address the dead in a satirical way, they are a way to celebrate the deceased in a humorous way.

For my Calavera Literarias I chose to write about someone who was still alive, and tell the story of how they died. The subject I used was Donald Trump, the first paragraph sets a scene, describing the plot for how he dies. In my poem I talk about how Donald Trump worships his spray tan, but it makes his hair fall out, causing him to freeze to death. I think my final product was fairly successful, but I think my writing is a little confusing, seeing as I didn't know most of the vocab I needed to write my Calavera Literarias 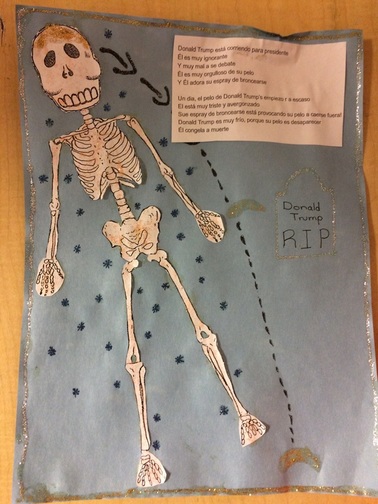 For this project we were asked to write a biography and create a painting in the style of  Frida, based on anyone of our choosing. I chose Pablo Picasso because I am interested in his art  style, and how I can compare that to Frida Kahlo's prefered style of art. Frida Kahlo is a very famous artist from Coyoacán, Mexico. She was interested in art since she was a child, and began painting after she suffered a bad accident that took years to recover from. She is best known for her self portraits that represent different events in her life. For my art piece I took a background from one of Kahlo's self portraits and put a picture of Picasso where Frida had put herself. I then added shapes to the art piece to represent Picasso's style of art. I wasn't very happy with my final piece due to the fact that I originally was going to do a painting, but ran out of time. Due to this I had to stop painting and do something that would take less time. If I could change this project, I would continue to paint, so I could present a a more refined a interesting final product. 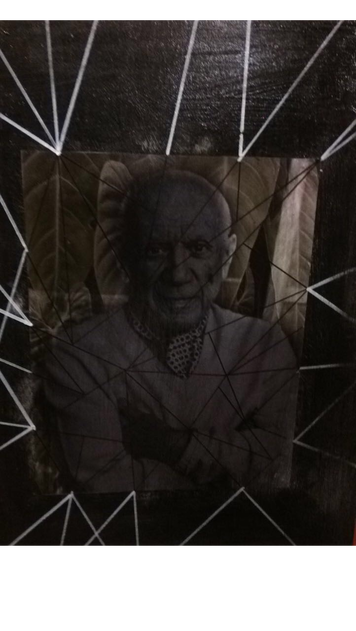